DC Moore Gallery is pleased to present Jacob Lawrence & Gwen Knight: Intersections, on view from February 16 – March 27, 2021. This focused exhibition offers viewers an opportunity to see rare examples of work by both artists, and celebrates their life together over sixty years.

Jacob Lawrence (1917 – 2000) and Gwendolyn Knight (1913-2005) would eventually settle in Seattle in 1971, but their life together began in Harlem in 1934. Their artistic pursuits generally remained separate, but both are marked by an unending commitment to figural and modernist representations. For Lawrence, this meant depictions of African American experiences, both of everyday life and historical events. Knight focused on portraits and nudes, which she created with spontaneity and intimacy, expressing her personal, imaginative response to the people and places around her. 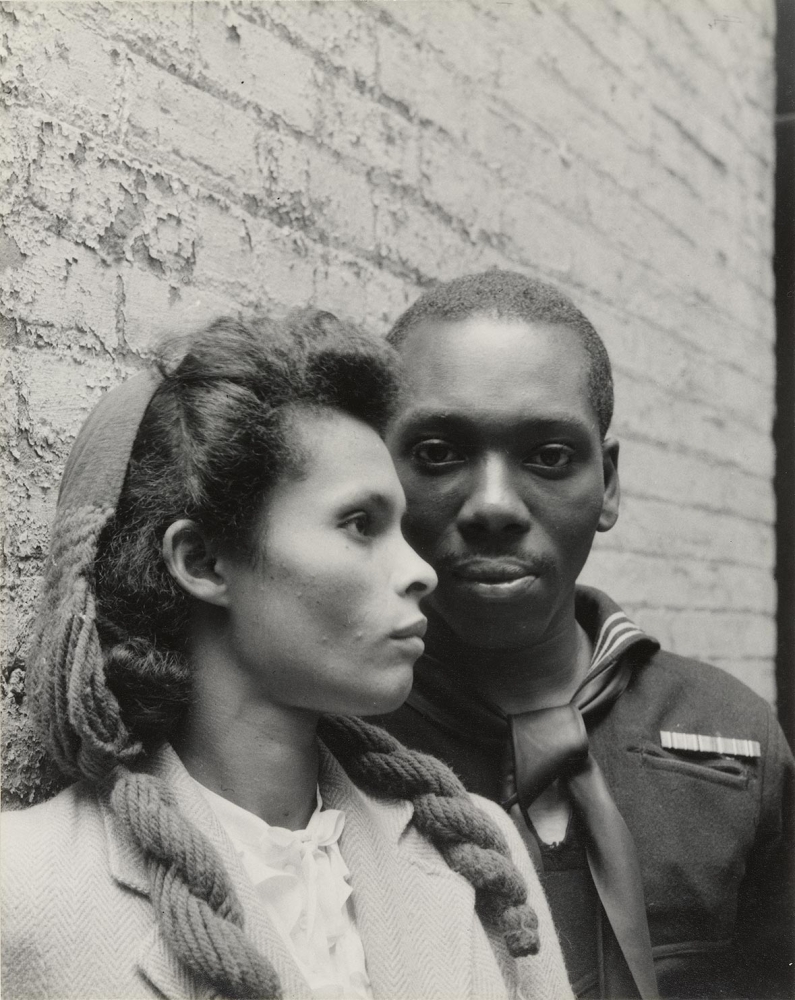 Lawrence and Knight met at the studio of artist Charles Alston where Knight was employed by the Works Progress Administration (WPA). Before working with Alston, Knight attended Howard University, until the Great Depression forced her to leave after two years. She then studied painting and sculpture under the tutelage of Augusta Savage at the Savage School of Arts and Crafts in Harlem, and it was through Savage’s guidance and encouragement she was employed by the WPA. When Lawrence and Knight first met, Knight, being four years older, was the more traveled and worldlier of the two, while Lawrence was just sixteen. Within several years, Lawrence was deemed a prodigy in the art world, creating bold and searing depictions of life in Harlem and by 1938 he completed his first historical narrative series, The Life of Toussaint L’Ouverture. Lawrence’s earliest work included in this exhibition, Pool Players (1938), depicts figures in a billiard hall, expressing the liveliness and camaraderie that Lawrence found in the neighborhood of Harlem, despite the ongoing upheaval caused by the Great Depression. 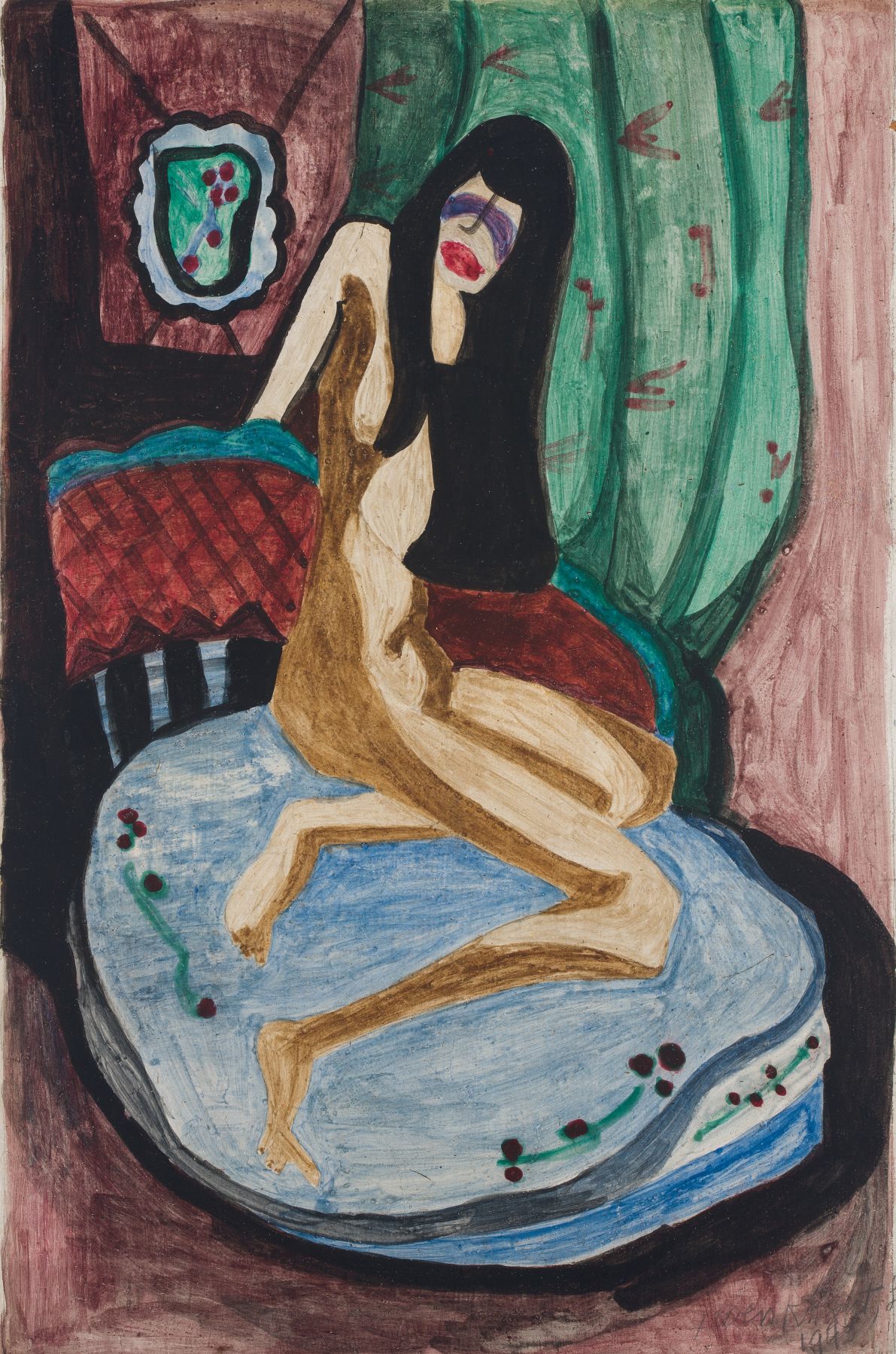 In 1941, Lawrence and Knight were married and afterward traveled to New Orleans on their honeymoon. Lawrence worked on The Life of John Brown series and Knight, energized by the city’s vibrant culture, painted her new surroundings. New Orleans may have inspired Knight’s earliest painting in the exhibition, The Boudoir (c. 1941), an example of the artist’s dramatic portraiture and depiction of interior space with bold forms over drawn line. The female nude is rendered on a chaise lounge in a uniquely realized angular position.

The couple was soon to be separated as Lawrence was inducted into the US Coast Guard in 1943 during World War II. He attended boot camp in Maryland before being assigned to one of the first racially integrated ships in US naval history, the USS Sea Cloud until he was transferred to the USS General Wilds P. Richardson. The troop transport ship sailed continuously across the Atlantic and shuttled soldiers and supplies from the United States to England, France, Italy, Trinidad, and India. He was aboard the naval ship as a “combat artist” documenting his fellow coast guardsmen and their travels. While traveling aboard the ship, Lawrence worked in pen-and-ink drawings and reportedly completed almost 90 works on paper that he numbered, including three on view in this exhibition. Men on Watch in the North Atlantic (#86), Conversation with a Veteran (#87), and House in Italy – Naples (#89) are three of the seven drawings that survived, depicting scenes of the soldiers both in combat and off-duty. While in the service, Lawrence had his first solo exhibition at the Museum of Modern Art in New York in 1944, although he was not discharged until the end of 1945. 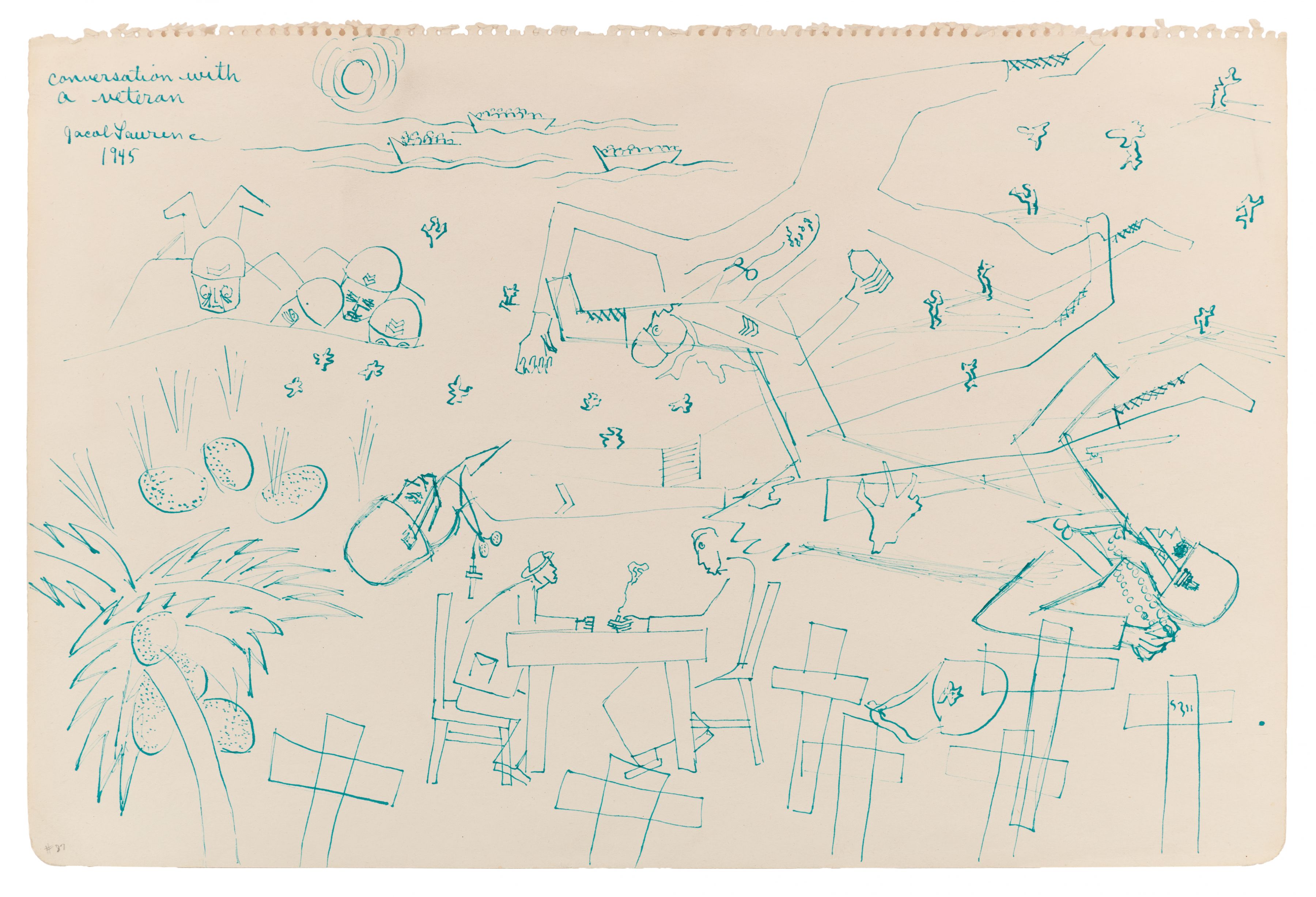 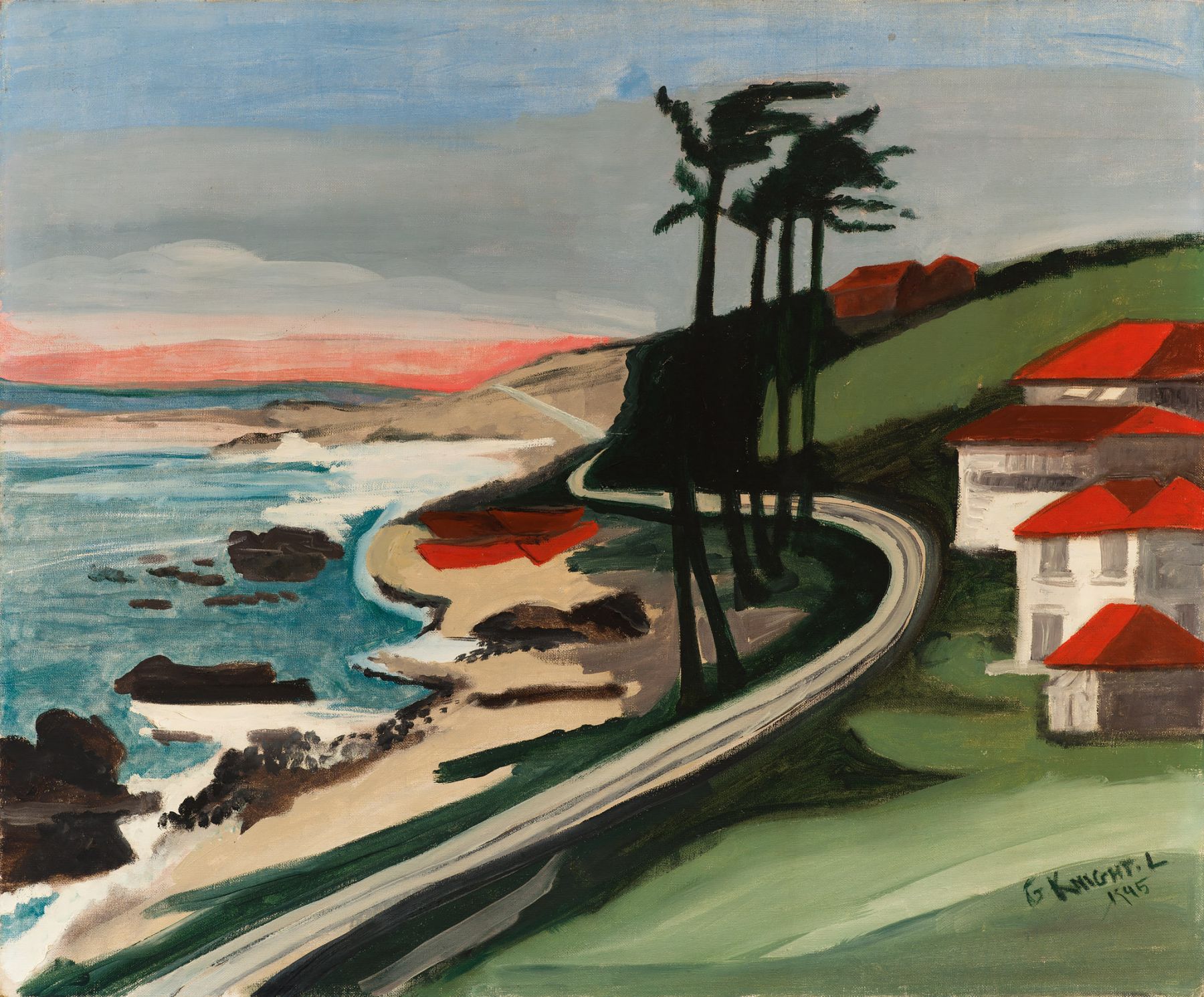 After Lawrence was drafted in 1943, Knight moved to Brooklyn and continued to work and further her individual artistic style. The painting, Untitled (Barbados) (1945), was completed while Lawrence was serving abroad after Knight had settled into their new apartment. Born in Barbados, Knight’s father died when she was only two years of age and her mother was disabled by an accident in a strong hurricane. Supported by the encouragement of her mother, Knight traveled to the United States at the age of 7 with friends of her family. Untitled (Barbados) is a nostalgic memory of the island that she missed, especially during the difficult time apart from her husband. Her decision to move to Brooklyn was largely because her Barbadian foster family lived there at the time. Notably, this is the only surviving painting that she made of the country to which she felt so connected. Knight would not return to Barbados until 1973, accompanied by Lawrence when she reunited with her 80-year-old mother. 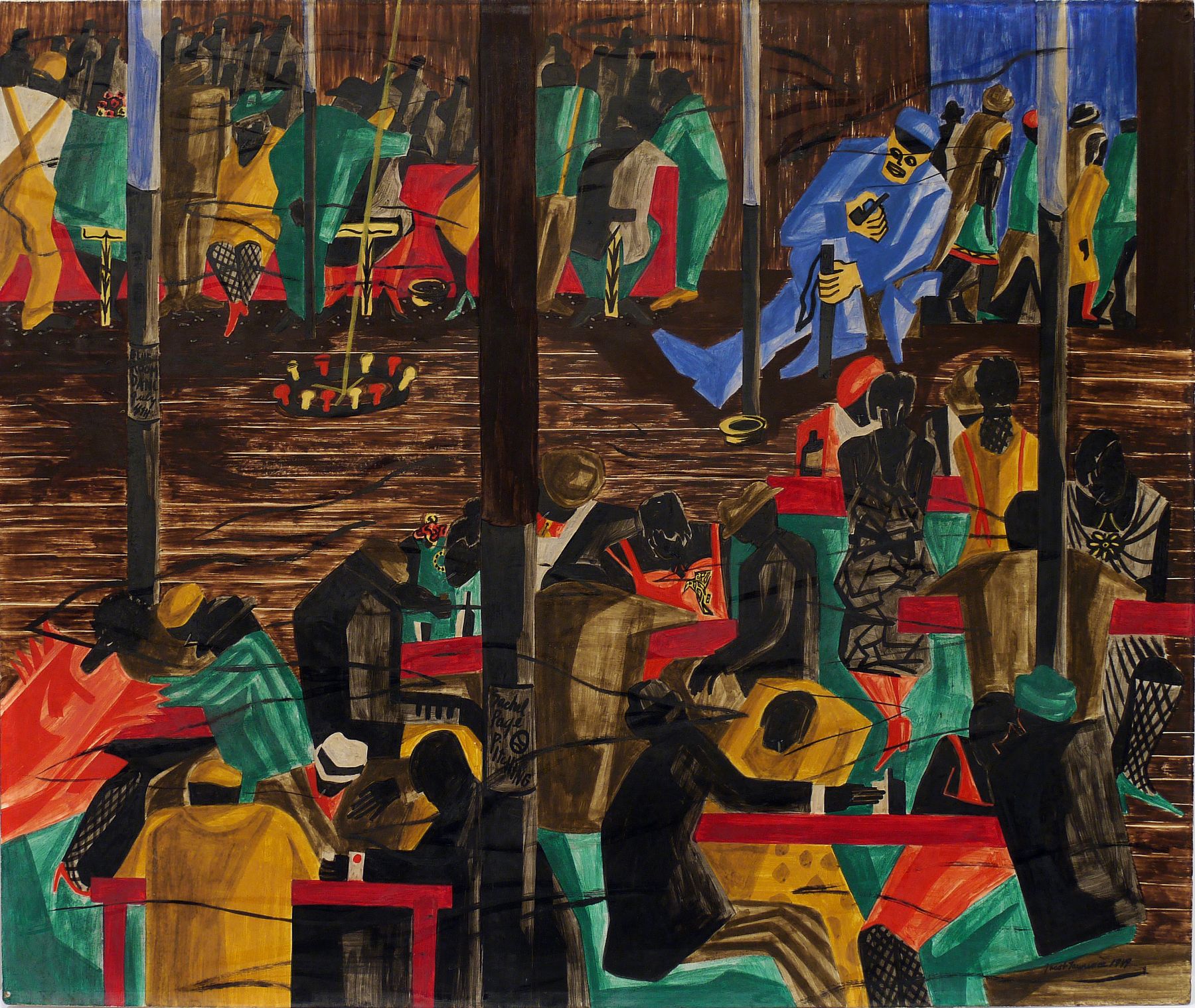 The years following World War II were busy for both Lawrence and Knight. In 1946, they were invited by Josef Albers to travel to Black Mountain College in North Carolina. Lawrence taught art classes at the college, the first of many teaching posts he would take, while Knight, who had studied dance with Martha Graham, taught informal dance lessons and attended classes. During this summer in North Carolina, Lawrence and Knight remained on campus, shielded from the pervasive racism and laws of segregation. In 1947, Walker Evans, then an editor at Fortune Magazine, commissioned Lawrence to create a series of paintings depicting the lives of Black Americans in the southern “Black Belt.” Traveling to Mississippi, Alabama, Louisiana, and Tennessee, Lawrence recorded postwar conditions in the rural south witnessing the economic disparities amongst the wealthy and poor Black communities. One of the ten paintings completed in this series, Beer Hall (1947), is a powerful statement of rural black life that melds the representational and the abstract in a depiction of laborers coming together, some dressed in suits, others overalls. A sense of the daily struggle and the harsh reality of racism pervades the scene, reinforced by the looming presence of the single white police officer in the upper right corner of the scene, sitting apart from the crowds. Uniformed and armed, he leisurely smokes his pipe and surveils the bar’s patrons. 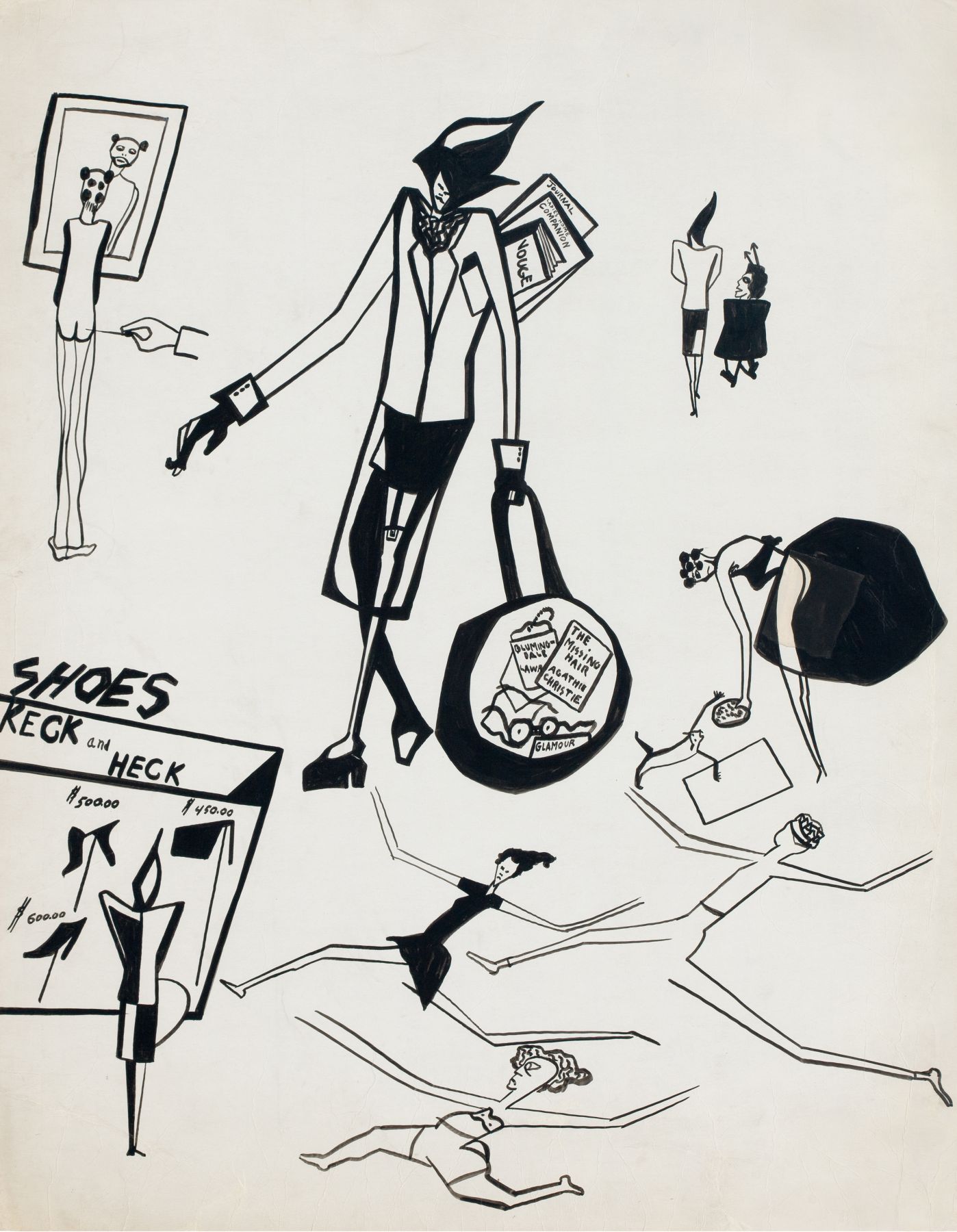 One of the most intimate and personal drawings Lawrence ever produced, Untitled (Sketches of Gwen) (c. 1948), includes a series of vignettes created with brush and ink depicting Gwen in various quotidian scenes. Gwen, ever elegant and fashionable, is shown walking down a street, first alone and then with her best friend. She is also pictured in a dance class, feeding their cat at home and peering into the window of an expensive shoe store. At the center, Gwen is seen walking with her style magazines under her arm and her beloved mystery novels in her bag. On the upper left, she stands looking at herself in the mirror but only sees an unattractive face looking back at her. A hand, her husband’s, comes out to poke her, to let her know that what she sees in the mirror is not reality and that she is indeed beautiful. The work is thematically rare in the context of Lawrence’s oeuvre but is contextualized by other brush and ink works on paper completed during these years. 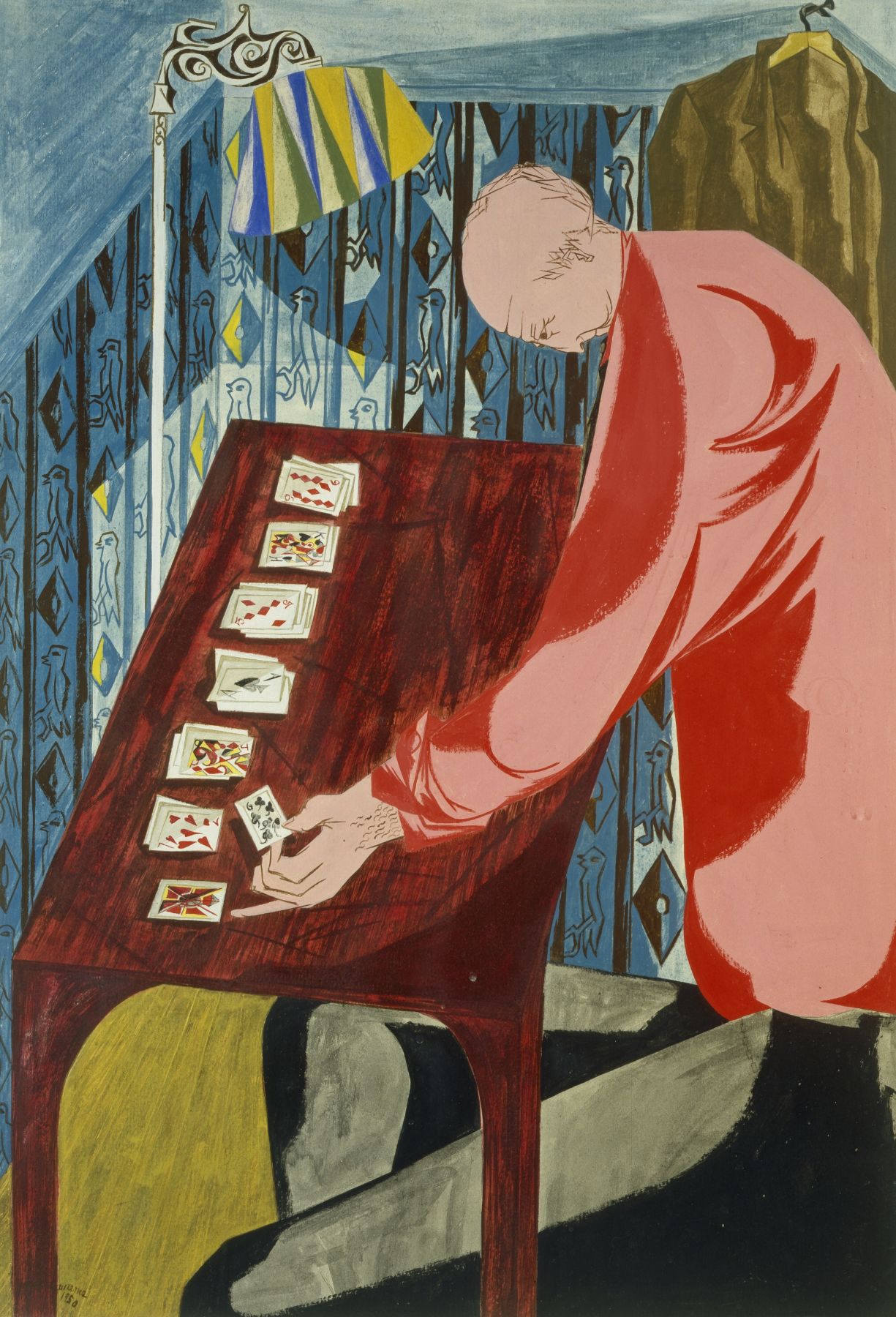 Overall, the decade of the 1940s was one of significant artistic and professional growth for Lawrence. He established a successful relationship with the Downtown Gallery in New York City, exhibited frequently, and received wide recognition and critical acclaim for his work. Lawrence voluntarily entered the Hillside Hospital in Queens in 1949 as a psychiatric patient, the mounting pressures and accumulated stress of his new-found fame resulted in severe depression, where he would remain for almost a year. Lawrence’s paintings following his hospitalization are characterized by a more introspective approach, reflecting the personal insights he gained during this time. Solitaire (1950) was completed shortly after he left the hospital, evoking a dual reference through its title and subject to the card game and the man playing alone.

Lawrence continued to work tirelessly in the 1950s and completed a series of theatre-inspired paintings as well as his Struggle series. Struggle: From the History of the American People (1954-56), was recently on view at the Metropolitan Museum of Art in the traveling exhibition Jacob Lawrence: The American Struggle and is a series of thirty panels conceived to visually narrate the history of the creation of the United States of America. Knight’s work was exhibited in 1967 in a group exhibition alongside that of Jacob Lawrence, Benny Andrews, and Raymond Saunders amongst others. Knight had only exhibited her work once before this exhibition, but in the following years, she would do so more frequently. Beginning in 1968, Lawrence and Knight spent less time in New York City and spent several summers in Maine at the Skowhegan School of Painting and Sculpture, teaching and taking classes. 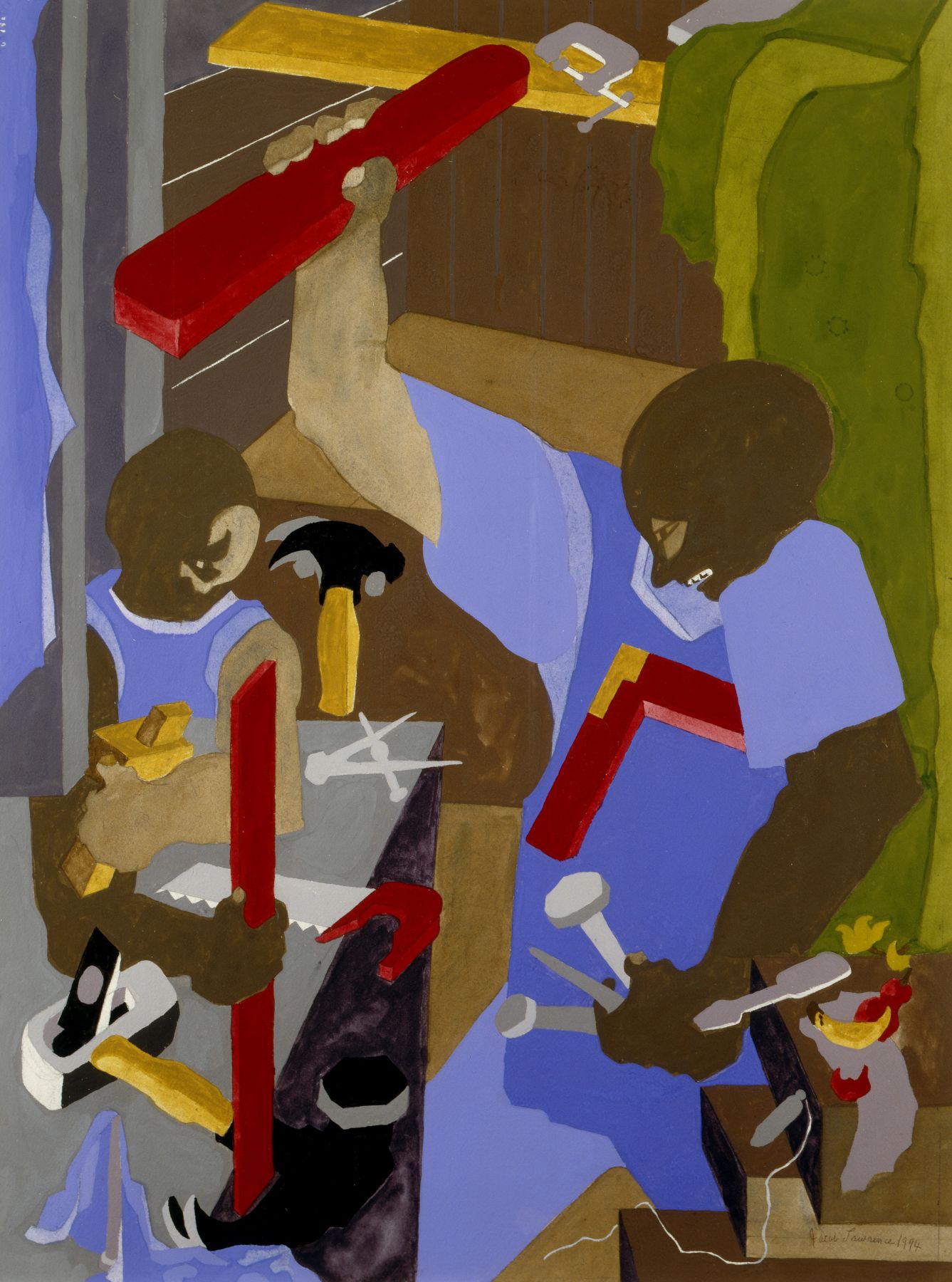 In 1971, Lawrence was offered a tenured professorship at the University of Washington, which he accepted, and so they moved to Seattle planning to only stay for a few years. Lawrence developed his “builders” subject at that time, which underscored his life-long interest in the themes of struggle and labor, as seen in The Cabinet Maker (1994). Knight had her first solo exhibition at the Seattle Art Museum in 1976 and was introduced to printmaking, which ultimately became her medium of choice. Four of her prints are included in this exhibition, including The White Dress (1999) and Girl (2004), both of which are based on paintings that she had completed earlier in her life. 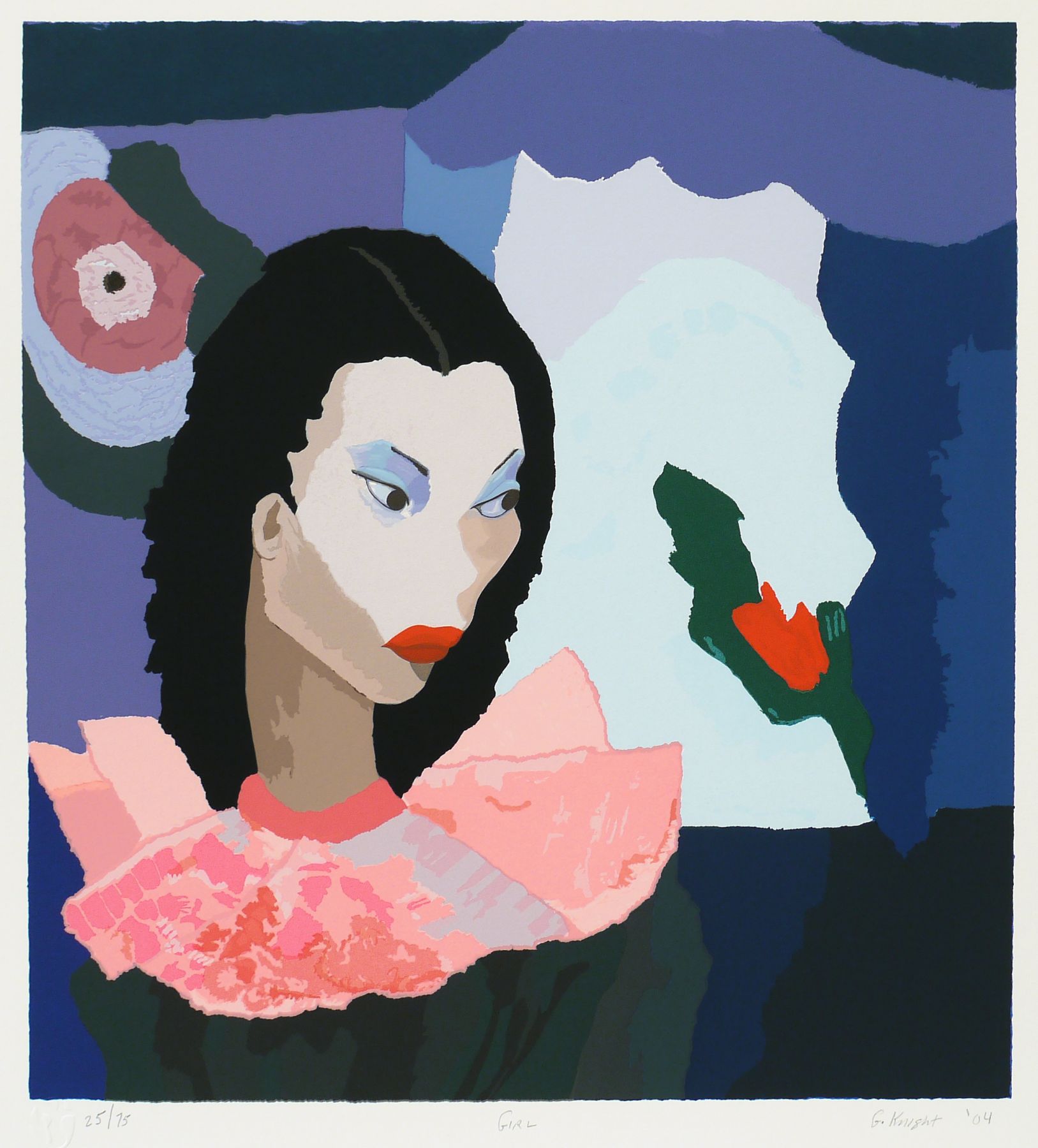 Their compositions reveal how she experimented with sharper abstraction, energetic lines and color, though her love of portraiture continues to be evidenced by these prints. Gwen Knight was the subject of the retrospective exhibition Never Late for Heaven: The Art of Gwen Knight, organized by the Tacoma Art Museum in Washington in 2003, that was accompanied by a monograph with the same title. Her work has been included in recent traveling exhibitions alongside that of Jacob Lawrence, including Between Form and Content: Perspectives on Jacob Lawrence and Black Mountain College, exhibited from 2018 to 2019.

Jacob Lawrence & Gwen Knight: Intersections celebrates their artistic legacies and contributions to the canon of twentieth-century American art. True to their strong and independent characters, their artistic production remained wholly individualistic and self-determined throughout their lives, yet they always fiercely supported one another. After almost sixty years of marriage, Jacob Lawrence died at home at the age of 82 in 2000 and Gwen Knight at the age of 92 in 2005. Near the end of their lives, they set up a foundation and established charitable gifts to help artists and young people, also to further the research and study of American art.

This is the eleventh Jacob Lawrence exhibition presented by DC Moore Gallery since 1995.

Conversation with a Veteran, 1945

Men on Watch in the North Atlantic, 1945

Brush and ink on cardboard

Conversation with a Veteran, 1945

Men on Watch in the North Atlantic, 1945

Brush and ink on cardboard