375 Hudson Street, in partnership with DC Moore Gallery, is pleased to present Joyce Kozloff: Mind Mapping in the Lobby Gallery. A veteran of the Pattern & Decoration movement, Kozloff's mixed-media works explore the intersection of cartography, culture, and history on a global scale.

The lobby is open Monday through Friday, from 9am-5pm, and the exhibition is open through April 8, 2021.

Joyce Kozloff makes maps, topographies, and geo-spatial renderings that combine historic spaces with terrain that is unmappable: the past, the unrequited, and the war-torn geographies of the human psyche are all ghosts that haunt her extraordinary cartographies. Kozloff’s densely patterned surfaces are mixed media works that blend drawing, collage, found maps, mosaic, and cut paper. The Tempest (2014), for instance, is an island-studded with tiny souvenir globes. While based upon an 18th-century Chinese world map held at the British Museum, the work also potentially nods to the nameless landmass off the coast of Italy where Shakespeare’s play originates. Bordered by gray, fierce seas in which para-surfers frolic amid the same waves as medieval fishing vessels, Kozloff creates an iconography that collapses time through dense layering and easily recognizable seafaring symbols mixing the historic and contemporary. Her maps leverage a simultaneous critique of contemporary U.S. imperialism and centuries of European colonialism, and their comparable thirst for expansion, raw materials, and worldwide domination.

Such an aesthetic stew draws upon the historic strategies of the Mexican Muralist movement, in which the painters Diego Rivera and Miguel Covarrubias utilized cultural fusion in their political murals to provide commentary on a swirl of heady and difficult political topics of the time. In particular, Covarrubias (1904-1957) produced The Fauna and Flora of the Pacific, a vast, six-part map created for the 1939 Golden Gate International Exposition in San Francisco. Kozloff, too, has a strong commitment to producing large-scale public art projects, most recently for the 86th Street Central Park West subway station in New York, a sample of which is included in this exhibition, a densely patterned mosaic of glass and ceramic tiles.

Kozloff is a veteran of the Pattern & Decoration movement, a cluster of New York painters, who, in the late 1970s and throughout the 1980s, made painting-based artworks inspired by the intense ornamentation and decoration privileged in non-Western cultures globally. During this era, she experimented with glazed ceramic, fabric, furniture, and paint to create commissioned decorative works and room-sized installations that combined source materials from civilizations across history, including Islamic ornament, Chinese porcelain, Japanese kimonos, and Art Deco design. These works were a way to implicate the barriers to high art that historically excluded vernacular and inherited traditions made by women, people of color, craftspeople, and rural artisans. Kozloff sought to preserve the continuity between ancient and contemporary cultures, as well as to pay homage to anonymous artisan labor. These works stood in stark contrast to the dominant trends of the New York art world at that moment: Minimalism’s factory-made squares, beams, and rectangles, and the intensive subjectivities and narcissism of Neo-Expressionist painting. Both were movements dominated by men, while Pattern & Decoration was a loose collective of feminist artists and their male allies. Alongside her object-making, Kozloff has always been an ardent feminist and political activist, and a committed member of the Heresies collective, a New York-based community of women artists whose extremely influential journal ran from 1977-1993. Heresies also published the earliest artist-authored texts on Pattern & Decoration, preserving its fruitful conceptual approaches, motivations, and aesthetic strategies.

During the mid-1980s, Kozloff began working with maps as an extension of her public art commissions, one of which was a subway tile work for the Los Angeles transit system in 1993. Struck by the possibilities of aerial viewing, the transmission of information, and the color-coding of, for instance, water versus land, Kozloff pursued diagrammatic maps as rich documents of exuberant exploration: combining way-finding, politics, and the imaginative journey. Spheres of Influence (2001) is one of the earliest works included in this exhibition, separate leafs arranged side-by-side like celestial surfboards, based upon a gigantic atlas published in the year 2000, by scholars who reconstructed the Greco-Roman world. Yet this one is overlaid with the coordinates of contemporary geospatial mapping, drawn from tactical charts produced by the National Oceanic and Atmospheric Administration for pilots. Kozloff’s inference is that the U.S. is a pervasive Empire akin to the Roman Empire, yet its surveillance is somehow inadequate: stymied by a flattened and oblique sense of the world.

Experimenting with round disks, Kozloff has also pursued more lyrical source material through the realm of ancient cosmologies: celestial globes and symbols drawn from astrological charts, such as in the days and hours and moments of our lives and Revolver (2008) This poetic nuance expanded to the colorful hanging grids of Voyages: Carnevale (2006) that resemble Mexican cut-paper collages but reference the masquerade of Carnival, the vibrant springtime Mardi Gras festival with early modern roots found throughout the Catholic world; its ritual of masked costumes, heavily decorated with beads, feathers, and sequins, underscores the aesthetic tensions of high and low art forms. Such a series returns Kozloff to her ongoing set of interests in world culture beyond the provincialism of New York: itself an island culture. 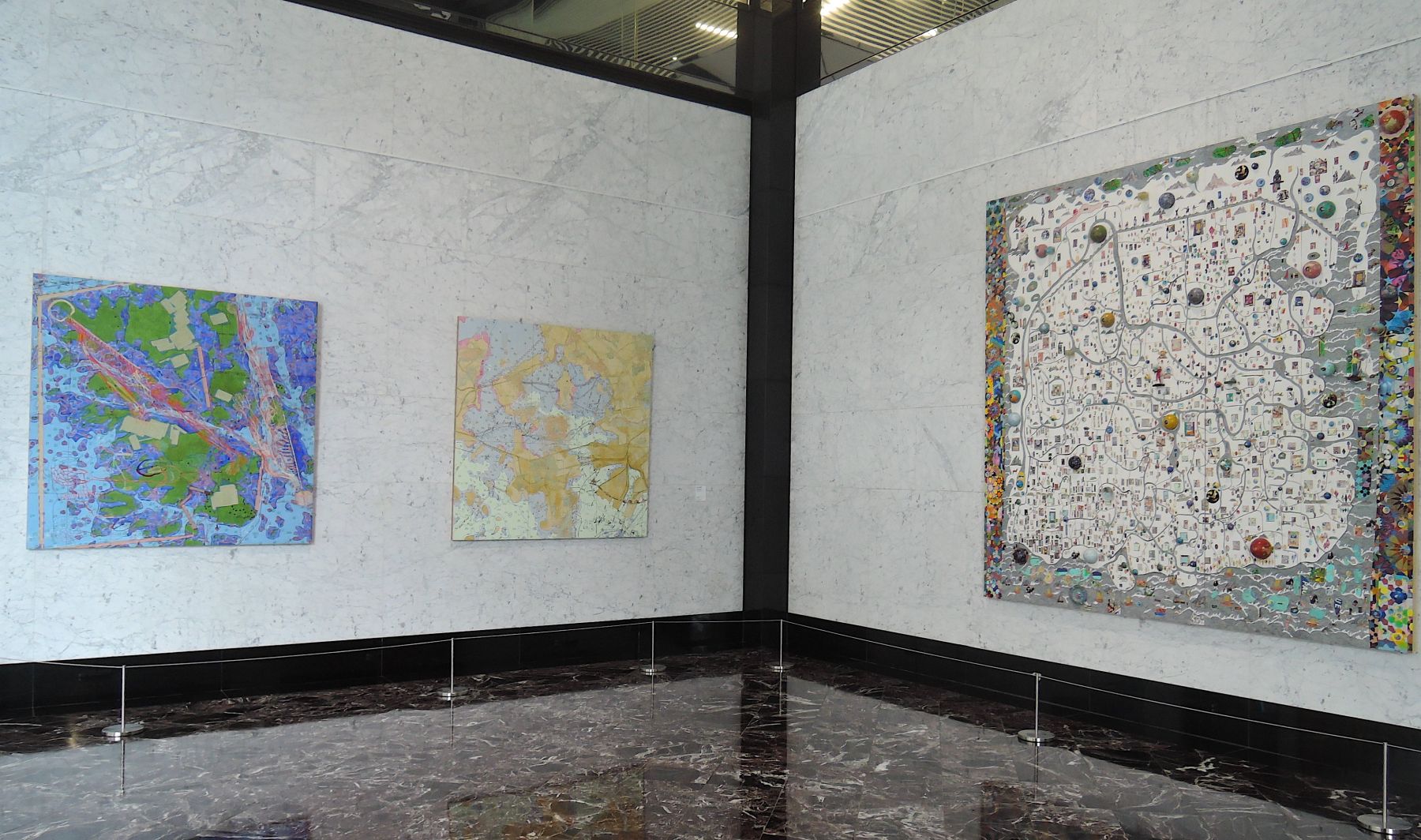 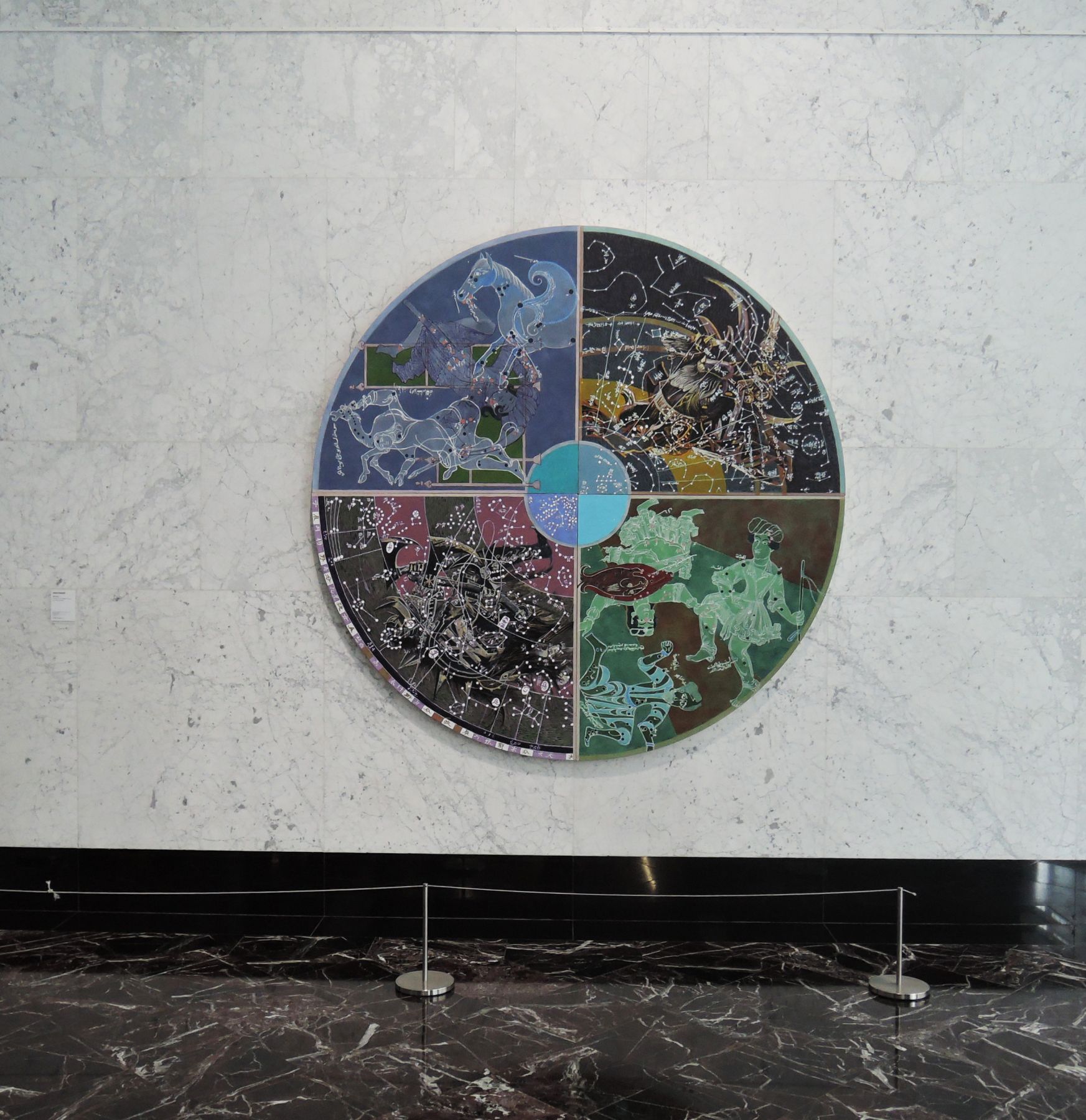